In 2003, three friends started a retail chain. Business was great—until the 2008 recession. After the downturn, many of their stores sales decreased at an alarming rate, and some even had to close their doors. Within a year, the company’s net income had been reduced by half, forcing the founders to adopt drastic cost-cutting measures to save their once-successful business.

But the worst part of this financial crisis was the toll it began to take on the relationships between the three founders.

These men and women had entered their partnership with the same principles, faith, and goals, and had achieved great results thanks to their strong communication and collaboration. In the process, they had built a company culture of risk-taking, speaking up, giving, receiving, and being vulnerable. This culture, more than anything, was the secret sauce that made their team so successful in serving their customers.

But as business went from bad to worse, the culture of fun, honest communication, and seemingly deep connection they had enjoyed for years eroded as their interactions became infected with criticism, blame, embarrassment, shame, rejection, punishment, and judgment.

It didn’t take long for these tensions to trickle down through the rest of the staff, causing mistrust and division among the ranks. The company’s culture became filled with anxiety as communication descended to controlling, disrespectful directives.

Thankfully, the partners finally recognized that the biggest threat to their business was not financial loss, but the disconnection that had infiltrated their team culture. They decided to go to work repairing their connections and remembering why they had all decided to go into business together.

The process of restoring their relationships was long and painful, and at times they all felt like giving up. They had countless meetings with consultants, mediators, and friends. In the end, however, they succeeded in rebuilding their trust and confidence in one another and on their team, all while working hard at winning new contracts.

Today, the company has recovered and is fulfilling its mission—both to sustain a healthy culture of connection and to serve their customers well.

Stopping the Downward Spiral of Disconnection

I think it’s safe to say that most of us don’t intentionally plan to choose disconnection. We usually end up there as the result of a “fight or flight” reaction to stress or pain.

In the case of these business partners, the road to disconnection began when the recession first hit and fear of impending financial struggle set in.

The problem was that they reacted, rather than responded, to this fear and began to withdraw and isolate themselves from one another. Instead of communicating directly, they began communicating mainly through their assistants and memos, which contributed to the escalation of misunderstandings, hurt feelings, growing suspicions, judgments of bad motives, and finally, accusations and blaming.

When the financial hit finally came, they were so entrenched in self-protection mode that, instead of joining forces to solve the problem, they descended further into division and defensiveness.

So what does it take to reverse this downward spiral of disconnection–and prevent it from happening in the future? Here are 5 steps to take:

As my friend Danny Silk often points out, at any given point each of us is pursuing one of two goals in a relationship: connection or disconnection. Again, pursuing the goal of disconnection usually doesn’t begin as a conscious choice, but as a reaction. However, the only way we can reverse course and choose the goal of connection is to take ownership of the fact that we have allowed fear, pain, and powerlessness to get us to change our goal.

Changing our goal isn’t easy–it’s an act of repentance that requires humility and courage. It means owning the ways that we have contributed to the breakdown of connection and being willing to change our behavior.

Step 2: Clarify the Experience of Connection You Want to Rebuild

It’s also important to become clear on what a healthy connection is if we want to pursue it as a goal. In The Gifts of Imperfection, Brené Brown defines connection as “the energy that exists between people when they feel seen, heard, and valued; when they can give and receive without judgment; and when they derive sustenance and strength from the relationship.”

In The Business of Honor, Danny and I distill this description into three basic qualities or effects of connection:

These are the qualities we want to rebuild on the other side of disconnection.

In the early years of my business, I learned the hard way why it never helps to do what these business partners did and stop communicating with each other. When problems arose, I would allow pride and fear to drive me into isolation and try to solve the problem on my own.

All this did was stress me out more and send the message to the team that I didn’t trust them enough to be honest with them about what was going on. This made it much harder for us to come together and build solutions to the problem.

Now, I go to my team right away when stress is brewing. I tell them what I’m feeling and we rally together to face the issues head-on. This assertive, honest communication demonstrates and protects trust, and sets us up to collaborate effectively.

Building this culture of trust usually requires adjustment in your communication styles and skills. Those disconnected business partners had to learn, like I did, to be powerful in identifying what was going on inside them–their thoughts, feelings, and needs–and communicating that directly and honestly to each other. (Danny has great stuff on how to communicate assertively in Keep Your Love On, which, by the way, is the best book on relationships I have ever read.)

Safety in relationships largely comes down to that ability to “give and receive without judgment.” Nothing makes us feel more threatened and unsafe in relationships than being on the receiving end of punishment in the form of criticism, accusation, and blame. The only way to fight to maintain a safe place is for us to refuse to resort to these for any reason.

One of the best ways to avoid punishment and preserve safety is to practice a default of either refusing to judge someone’s motives or assuming that their motives are good. When people hurt or scare us–as they inevitably do–it’s natural to assume they’re doing it intentionally. Most of the time they’re not–they’re just hurt and scared themselves. We are a safe place when we can see a hurt and scared person in front of us and move toward them in a way that lowers anxiety and brings comfort, rather than exacerbating the problem.

When these business partners chose to start seeing and believing the best about each other, even after seeing them at their worst, they moved toward recovering safety in their relationship.

The last thing that enabled these business partners to rebuild their connection was the commitment they made to continue meeting regularly, even after they dealt with the big issues that had caused the disconnect.

Their goal in these weekly meetings was to practice staying honest with one another so they could deal with issues quickly as they came up, and to pour good things into their connection and recover their ability to enjoy one another again. Sure enough, over time their sense of being accepted, received, respected, and valued increased. On the other side of repairing their disconnect, they are keeping current with one another and have an even deeper connection than the one they lost.

Repairing a connection is not easy, but it’s so worth it–for you, the other person, and everyone your lives touch. If you’re struggling in a relationship, I encourage you to consider these five steps and what you can do to strengthen your connections.

Connection is a primary theme Danny and I address in our book, The Business of Honor. To support you in your journey to live and lead with honor, and get the most out of the book, we put together a Book Club with a video and discussion guide for each of the 10 chapters in the book. You can use them on your own or with a group! 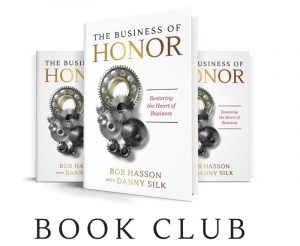 Grab these Book Club resources by signing up below!